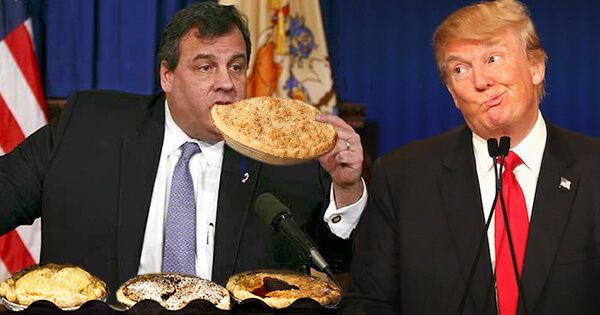 Chris Christie set the political world in a tailspin by offering a novel approach to deciding the next Republican Presidential Nomination - a good, old fashion pie eating contest. He estimates that he has the best chance of winning this type of contest. He was quoted as saying, “I know I’m the fattest. I’m the 400 pound elephant in the room! And out of all of my fellow candidates, I’m the only one willing to dig my hands in and get dirty. As a Governor I’m accountable to the people!”

His opponent, Marco Rubio, quickly pointed out, “Get his hands dirty? Two years ago at the New Jersey Pie Eating Contest, Christie was adamantly opposed to contestants using their hands. He stated, and I quote, “People who eat with their hands cheat the system.” Just like everything else about Christie, he flip flops to serve his current interest. Besides, he doesn’t think Barack Obama knows what he is doing? Trust me, Obama knows exactly what he’s doing! The pies are filled with GMOs from Monsanto! And laxatives! This makes you the ultimate Washington insider.”

Christie rolled his eyes when informed of this latest jab by Rubio. “Marco doesn’t have the experience to win a pie eating contest. He’ll fall back on how his advisors tell him to eat the pie. He’s too young to eat a man’s size pie. He should go back to the kids’ table. He wants to talk about laxatives? Not surprised he’d stick on his one talking point… This isn’t about Obama Marco, and maybe you’re the one full of shit! Don’t blame the pies, ever! I love pies and there is nothing more American than apple pie!”

Donald Trump, the current front runner, was asked about the validity of a pie eating contest, he pursed his lips and bobbed his head from side to side for a moment in contemplation. Smiling broadly. “I could participate in a pie eating contest, if that’s what my voters want. I might… But I won’t eat with my hands. It’s barbaric. I’m not Mexican. I have beautiful silverware that I didn’t steal… technically. It’s the best. The best…”

Ted Cruz was quick to point out a pie eating contest is not standard in American politics and has nothing to do with being a good Christian or standing up for the constitution as he would, if elected President.

Jeb Bush was unsure of what was going on said, “Look, I have the even temperament to be President of the United States. I’m the steady hand the voters need right now. I don’t want to eat pies with Chris Christie next week, that sounds like a terrible idea. Does he know anything about diabetes or the childhood obesity problem in this country? Also, please be sure to brush your teeth after eating pie.”

Ben Carson when asked about the pie eating contest said, “No. No, I will not eat a bunch of pies like a performing clown – that is more the arena of my friend Donald Trump. Besides, unlike these folks I can’t afford a million suits. You really think you can eat a bunch of pies and not get some filling on your suit? It’s just unrealistic. That’s the type of President I would be, I would never be wasteful or eat far too many pies like Chris Christie is all too eager to do.”

Can Christie’s challenge narrow the field on the massively overcrowded GOP ticket? Does their pie eating prowess tell the voter what they need to know about their presidential ability? Well, on the plus side, with a mouth full of pie, Trump won’t be able to talk.