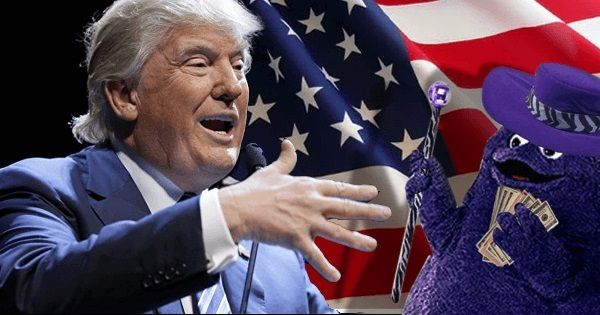 The Republican front runner selected McDonald’s Grimace as his choice for Vice President. During his press conference, Trump was clear that opponent Ted Cruz’s pick this week factored into his decision. His sole motivation for picking a running mate so soon, he said, was to one-up Cruz. “Anything you can do, I can do better,” Trump directed toward his rival during yesterday’s speech. He also stuck his tongue out and was later heard shouting, “Nana Nana, Boo Boo.”

Political pundits nationwide are criticizing the decision, claiming that it’s obviously a transparent attempt by Trump to reach out to communities of color. Outspoken and often viewed as a racist for extreme views, Trump said that his VP choice now proves that this isn’t true. “See, I’m not a racist. I love colored people,” he said. When a reporter pointed out that Grimace is actually purple and not even a real person, Trump just made another face. “You’re a reverse racist. You’re projecting your terrible thoughts on me. I love colored people. Colored people love me, yes, even the purple ones. Purple lives matter.”

Trump further defended his decision saying that Grimace was as “All-American” as cheeseburgers and $1 apple pies. The two first met at a 2002 filming for a McDonald’s commercial. It was during small talk on-set over a couple of milkshakes that Trump realized he had found his political soul mate. At his announcement, Trump stated he found his intellectual equal, saying he liked that Grimace is “a man of few words.” Ironically, this is the exact phrase Trump used to describe him in that 2002 commercial.

Trump admitted that he considered other candidates, including Jack Bauer, Lex Luthor and the Tin-Man. He even considered himself to be his own VP. But, as he reflected, the decision was clear. In telling this story, Trump seemed memorized by Grimace’s big, lifeless eyes. Lost in the moment, Trump turned to his new partner and whispered, “Together, Grimace, we can own this town,” again quoting directly from that same 2002 commercial.

In related news, Governor Chris Christie, who was already in line at a McDonald’s in Newark, NJ when he heard the news, grinned, drooled and reaffirmed his endorsement of Trump. “I love how McDonald’s now serves breakfast at all hours, and $1 coffee, it’s just wonderful. Like Donald Trump, he just understands America and what we need.”